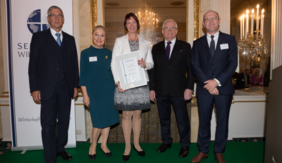 Dr. Kerstin Schulte has been appointed member of the German Senate of Economy where she represents the Test and Research Institute Pirmasens. The awarding of the certificate took place on the annual congress of the senate on 8th December 2017 in Munich by the executive committee of the Senate of Economics, Chairman Dieter Härthe and Dr. Ing. Christoph Brussels, in the presence of the former Foreign Minister and EU Commissioner Dr. Benita Ferrero-Waldner, Vice-President of the European Senate.

The Senate of Economy consists of individuals from the fields of economics, science and society, who are fully aware of their responsibility towards state and society. Together they strive to implement, in a practical and sustainable manner, the common good-serving aims of the Senate which are designed to promote an eco-social market economy.

The Senate of Economy is seeking to revive the traditional idea of the Senate in ancient times. It has only the common good in mind and is in constant dialogue with representative of politics and the sciences. The honorary senators Jean-Claude Juncker, Prof. Günther Verheugen, Prof. Klaus Töpfer, Prof. Jürgen Rüttgers and Rosi Gollmann number among the many experts who actively participate as initiators and motivators.

The ethical principles of the Senate are foundation and guideline for the economic activity of the members of the Senate. Fairness and partnership in commercial life as well as the social skills of enterprises and leaders shape the work of the Senate.

Aims and Tasks of the Senate:

You can find more about the activities of the Senate here: www.senat-deutschland.de