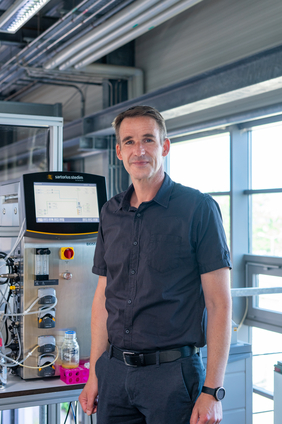 The competences in the bioeconomy cluster of the Zuse community. Sustainability is at the centre. 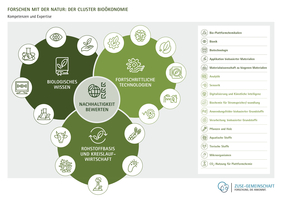 Berlin, 8 October 2021: From the cultivation of biomass and its utilisation for energy production to the manufacture of intermediate products and the use of biogenic resources in durable consumer products: the bioeconomy already surrounds us on a daily basis. But what innovations are emerging to maximise the impact of biogenic resources in terms of climate protection? This was the topic of the online workshop Bioeconomy of the Zuse community on 6 October.

Fermentation creates energy and chemical products from pizza leftovers
Biomass utilisation options are often perceived as competition. Dr Stefan Dröge, head of the biotechnology department at the Pirmasens Testing and Research Institute (PFI), showed how this can be defused. Using the example of dough residues from pizza and other baked goods as a source of raw materials, he presented how both biogas as an energy supplier and biobutanol as a fuel or chemical for industry can be obtained in a coupled way from the residues. "Biobutanol is not only an interesting alternative to bioethanol as a fuel, but also offers interesting areas of application in the chemical industry," explained Dröge, who sees considerable raw material potential in residues from the bakery industry that could be used regionally for bioeconomy cycles. The same applies, under different auspices, to straw as a raw material source for energy products on the one hand and for high-quality platform chemicals on the other. "In a project of the Bioeconomy International initiative funded by the Federal Ministry of Education and Research, we have achieved the production of the valuable platform chemical succinic acid and the extraction of biogas through the fermentation of digested straw," Dröge notes.

Saving CO2 through biogenic foams and fibres for car interiorsDr. Frank Meister, Head of the Chemical Research Department at the Thuringian Institute for Textile and Plastics Research (TITK), reported on how textile applications from the bioeconomy are increasingly able to be used in a key area of the energy transition - mobility - based on the BioMotive project funded by the European Union. The TITK is involved in the development of biogenic fibres and new lightweight materials for car interiors, where they are used for seats, dashboards or interior door panels, for example. Among other things, the researchers developed new so-called lyocell fibres from modified paper pulp. The special advantage at the TITK: at the Thuringian institute, the newly developed fibres could be produced in a small-scale test facility on a scale of several 100 kg. This increases comparability with the realities of industry and was the design basis for a recently built demo plant by Metsä subsidiary MI Demo in Äänekoski, Finland. "Lyocell fibres as a biogenic material avoid environmental pollution like that caused by the risks of microplastics with other materials. In addition, as a climate plus: the fibres and process principles we helped to develop and evaluate can noticeably reduce the CO2 footprint in the production of vehicles," Meister explains.

Dr. Markus Stöckl from the DECHEMA Research Institute (DFI) indicated that CO2 can not only be saved with the help of bioeconomy solutions, but that negative emissions of the greenhouse gas are also achievable. In his lecture "With electricity and CO2 to bioplastics" he showed how electrolysis is able to make renewable energies "storable". The approach: to produce so-called formate from carbon dioxide, the salt of formic acid that can be stored as a solid, which is able to serve microorganisms as a source of energy and carbon, which in turn produce the bioplastic polyhydroxybutyrate (PHB) from it. By electrochemically producing the intermediate formate, different microorganisms are able to be used. "We use an 'oxyhydrogen bacterium' as a microorganism that is able to grow on hydrogen, but also on formate," Stöckl explains about the project, which is funded by the German Federal Ministry of Education and Research. The PHB produced by the microorganisms exemplifies the coupling of electrolysis and biosynthesis. It is capable of being used in the plastics industry. "Our biotechnological process is not yet ready for the market, but it has made good progress. In addition, we are able to build on many years of good cooperation with an SME, which helps both sides for practical relevance and for the implementation of innovations," says Stöckl.

"The hallmark of successful bioeconomy research in the Zuse community is the practical transfer of concrete results to industry," explain the coordinators of the Bioeconomy Cluster, Prof. Frank Miletzky and Dr. Michael Meyer. "In terms of content, the research is just as committed to sustainable, climate-friendly development as it is to the overarching goal of a circular economy," according to Meyer and Miletzky.

The presentations of the workshop speakers will soon be available online at the following link:
https://www.zuse-gemeinschaft.de/veranstaltungen/termine/werkstattgespraech-online-biooekonomie-fuer-klima-und-ressourcenschutz-mit-angewandter-forschung